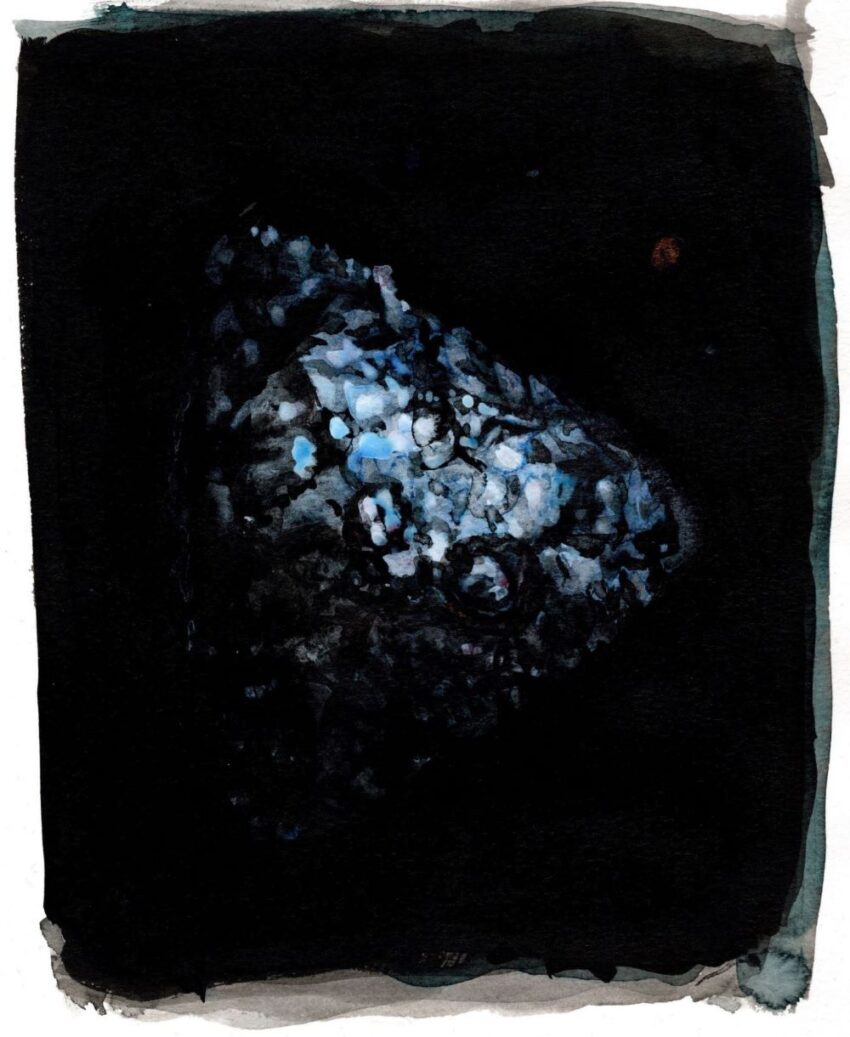 The fungus looked like scrambled eggs; yellow, moist and laying in lumpy piles. This was slime mold, single cell organisms that grew on the moist surface of this large, triangular rock. The asteroid was warmed by this fungal blanket growing and enveloping it’s every crater.

Achilles is one of the largest of trojan rocks in the orbit of a giant gas sphere. Millions of individual single cell organisms make up the slime. Millions of asteroids follow Jupiter. Like the asteroids, the cells don’t have brains or a spine or neurons that connect them, but they do communicate with each other. The mold cells stretch out like veins covering a damp warm carbon surface. They are reaching fingers with no body. The mold cells are moving slowly and deliberately, looking for something.

The mold is hungry.

You’re laying on your back and looking up at a drop ceiling. The panels are shadowy white and dotted. Your eyes can’t stop following the metal edged grids that hold the panels. You keep making patterns in your head as your are eyes constantly moving. Your trying to make sense of what your looking at. It’s impossible to make a complete rectangle because the grid keeps getting interrupted. The target shaped irregular vents and long intercepting tracks break up geometric perfection. You can’t decide if you should include frosted fluorescent light panels in your pattern. They are rectangle. Most of the lights are turned off.

The panels look like a school ceiling but that can’t be. You partially sit up to look around and see you are in a large room full of beds that are askew. there are metal frame and fabric partitions. Moving your arm you feel a tug. You have an IV. A hospital?

Everything is sterile white but looks gray in this dim light. If there are any dirt they can’t be seen. Cold light streams from the few frosted ceiling panels. You don’t understand what connects the lights. Everything is a pattern, you think. A flickering light in the corner makes a low buzzing hum. It is joined by a low din of unintelligible talking and sudden loud moaning. You turn your head left and see a pair of bloated blue legs coming out the end of a partition. They kick like they are swimming on a wheeled hospital bed. You look down. You are on a wheeled hospital bed.

The scrambled egg slime-mold branchs off the main fungal lump exploring the rock like an unbreakable sinew, a ligament connecting fungi to carbon.

You look up and see your ex-wife. Your neighbor called her after he called the ambulance. He could hear banging coming from your apartment. Your ex tells you this and says you had a seizure. You had hit your head on your kitchen floor. Your brain is bleeding. You choose not to respond. She calls the nurse over and you just look at them blankly. They start saying things to each other that make no sense. The nurse says he was talking to you earlier. He shines a light in both of your eyes and continues to ask you questions.

“What is your date of birth? Do you know where you are?”

You don’t need to respond, that would be foolish. This is just a dream.

588 Achilles was originally discovered by earth scientists in 1906 in southern Germany. It is a type D asteroid with a diameter of about 83 miles. It is the fourth largest Jupiter Trojan asteroid and the first to be discovered.