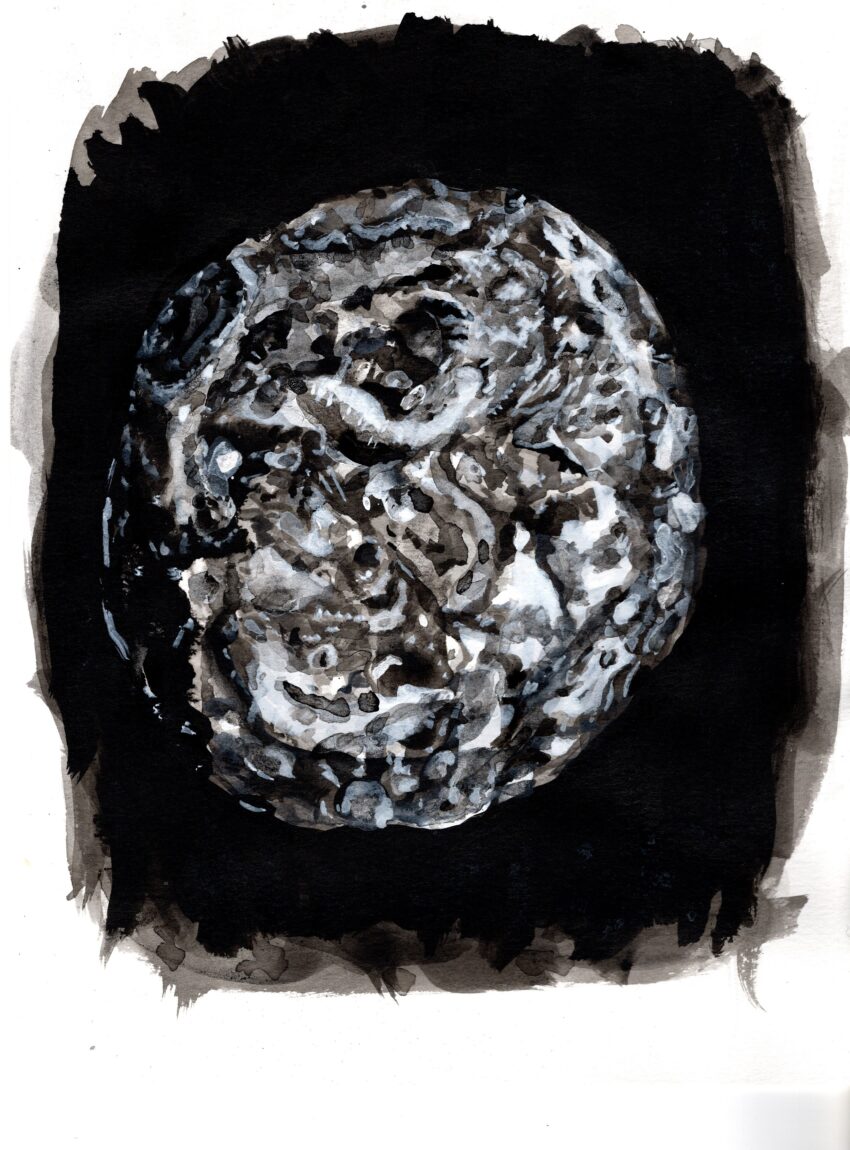 Circling the asteroid of Hygiea at a distance of 1.3 miles is the luxury spa-cruise ship of Asclepius. Throughout the solar system, Hygiea is known for its healing properties of its ice. The frozen water ice ponds spotted on this metal and rock sphere contain microorganisms that awaken and hunger when warmed from a cryogenic state. One of these microorganisms has folkloric healing properties, supposedly living on toxins from the body. The water is not healthy to ingest but it can be brought to high temperatures and bathed in. At its height, this form of bathing became a healing trend for the upper one percent of the wealthy.

10 Hygiea’s surface is dark and cold and has awkwardly low gravity and a mind bendingly highly magnetic field. In the early days, most of the health conscious people who were interested this once luxury priced treatment would not set foot on such a dirty and unaccommodating space rock. An exclusive spa resort was created above the uncomfortable surface to give a view of the ice chunks and validate authenticity of the water while soaking in this non-FDA approved medicine to heal.

With time this “treatment” became dated, less of a fad and advertised affordability.

Sonja was escorted through the wide corridors and into the “Lave” room by a tall skinny man with a black mustache wearing a skin tight lycra suit with a tiny white collar and a clip on black bowtie. As the dented metal doors squeaked open sideways, an unusual smell wafted out. It was the smell of the sea mixed with a pungent garlic and metallic odor.

The room was no bigger than a closet. It obviously had been much larger at one time then was cut in half for economic reasons. The small doorway was the entire back wall. The side walls were painted a sanitary rental white that needed a second coat. There were chips along the floorboards and bubbles in the corners. The fourth wall was a large sealed window that oversaw the asteroid below.

The center of this claustrophobic room was an overwhelmingly large jacuzzi tub. A long thin mirror stood on one side of the tub. It was stretched and designed to distort its reflected image in a way that would flatter the physique of the man or woman who peered into it. A system aged hooks were on the opposite wall. The metal plating was wearing off and showing white plastic underneath.

The ship hovered uncomfortably close to Hygeia’s landscape. The small world slowly drifted by as it moved in its natural rotation. Mostly dark, its surface was pitted in long, shallow craters. Large, glistening frozen, jagged ponds reflected the ship’s lights back to the spacecraft Asclepius. Bath water. This view was touted in the spas brochures.

After the attendant had exited with a bow, Sonja took off the thick white robe the spa had provided. She noticed an orangish-brown stain on the fleece lining and made a face of disgust. But what did she expect? She had used a coupon.

Hanging the robe on a worn metal hook, Sonja looked into the mirror and stopped to admire herself. “Exercise room is working”, she thought as she eased into the tub.  The water was viscous, bad smelling and almost unbearably hot to the touch. She would get used to it, she thought. She gazed down at her toes and at the rock that appeared huge just beyond the glass. It was uncomfortably close.

The water temperature became tolerable but the smells did not. It was noxious. She tried to call to her attendant outside the door but no sound came out of her. Sonja gagged with a little vomit coming out of her mouth and down her chin. Her body stiffened. Her vision began to be taken away as it was being taken over by a tunnel of red static. Her eyes closed halfway and shrinking pupils clicked from the left to right repeatedly. The tunnel closed. The fumes took over everything.

Sonja was soaking in a pool of black. Spots of white moved above her. It was the night sky. She was submerged in water. The air was clean and warm. Her body felt heavy and unmovable. A large rectangular object passed by overhead. It was metal and glass and made an old, rickety sound. The Asclepius. She was in a crater. Steam hung in the air.

Tiny pinkish dots swam in the water. They tickled Sonja’s body as they rubbed against her. They changed very quickly from eggs to an inch long in seconds. The pink creatures were human-like and had crowned heads. One had a red ribbon tied onto the crown. One carried a trident. They had wide tails to cover their nudity. She thought about advertisements she saw in magazines as a kid and was filled with joy. They began to do tricks. They did flips and water skied. Sonja laughed and clapped. “Sea Monkeys”, she whispered and giggled.

But things changed. The creatures flushed with darkness. Their crowns rounded into suction cups with tiny teeth. Their tails grew long and tape-like. As mature leeches they probed her body. One attached to the skin of her armpit. With disgust, she pulled on its tail but it only stretched impossibly long and wouldn’t detach.

Were leeches the treatment? It hadn’t been communicated to her. She wouldn’t have agreed to this. Would she?

Soon a second and then a third leech attached. The fourth had two heads and both grabbed a space on her stomach on either side of her belly button. Her skin was being covered like a suit.  The leeches grew fat with her blood. She was being drained.

Sonja stood up and stepped out of the tub. The man in the latex suit was holding the white robe open. He looked the other way for her modesty. She slid into it. The immaculate white fleece lining was soft on her skin.

10 Hygiea is the 4th largest body in the Main asteroid Belt. It has a radius of nearly 138 miles and makes up 3% of the total mass of the belt. It is considered an asteroid, minor planet and possibly a dwarf planet.