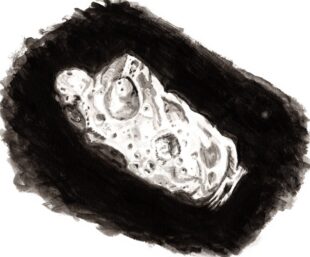 Ida could always feel her moon’s pull across her long body. The moon wasn’t large, about 1 mile at its widest and shaped like an egg. Its constant presenesence and pull was comforting most of the time. It felt like love to Ida. Or at least companionship. The gravitational pull was like a warm embrace always tugging, creating a closeness. A warm blanket wrapped around two bodies that squeezed again and again.

Most of the time this was beautiful but sometimes this loving embrace was almost too much. At moments it became overwhelming. As stifling and anxiety provoking as being smothered by a soft pillow. Thats the Duality. Ida feels this contradiction and wants to pull away from her tiny lover and breathe as much as she feels she needs to settle in and enjoy the warmth. Her feelings often don’t make sense. Ida is comfortable but becomes distant: drowning in awkward affection.

Was the constant circling and pull of this little moon making them happy? Or was it just suffocating?

243 Ida is the 243rd asteroid to be found and the first asteroid to be found with its own moon. Ida was discovered in 1884 but the presence of its tiny moon, Dactyl, wasn’t detected until 1994 when NASA scientists spotted it in a photograph taken by the Galileo spacecraft. Ida is small in size and irregular in shape measuring about 35 x 15 x 13 miles in diameter. It’s moon, Dactyl, is much smaller.